July 1, 2018 As I write, it is actually cooler outside than in the cricket. In terms of sleep, I tried turning the other way (to offset the slight slope of the bed), wrapping my head in a sweater - that helped, plus I drank two beers in the evening, which made me so tired I was falling asleep in the camp after looking at the fire Orion built. Across the way, here at this KOA, a man in a pink shirt just got out of one of the huge rigs with it’s slide-out living room, with four very tiny dogs. He watched the creatures poke around a bit, then funneled them all back inside.

We spent the day at Monticello. I purchased tickets online on Friday afternoon when we got here for 10:40 tour. We therefore had a pretty leisurely morning of drinking coffee (decaf for me, since the caffeine might have made my sleep worse), eating oatmeal with fresh raspberries and strawberries, and writing. Monticello (‘little house’ in Italian) is only about 10 miles away, and we got there in perfect Wild-Machen time. 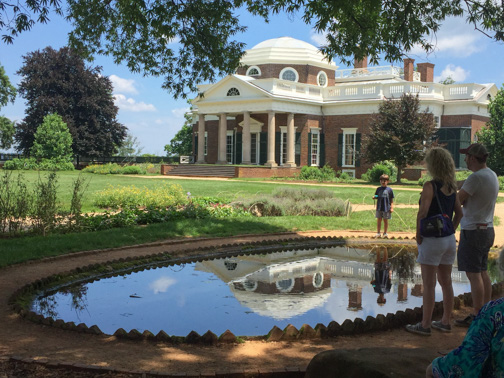 The nonprofit that runs the tours does a good job at organizing the thousands of people that visit every day. We took a shuttle bus up to the house and waited for just a few minutes prior to our tour to start. A grandmotherly lady tried to get the kids interested in kid projects, but they weren’t interested. The basic house tour covered the lower floor only, and we started at the entrance and worked away around those lower rooms, trying to absorb the many details of Jefferson’s house, his construction process and the things he surrounded himself with. The kids were attentive as always, but it was so hot outside that any mention of doing some of the extra tours on the grounds sent Phoenix into a posture of defiance.

Some of the cool things we saw (worth writing haiku about): beds in walls, elliptical archways in passages, the writing copier machine, and the deer rack from Louis and Clark expedition. Jefferson was wealthy, like others who inherited a lot of land back in the 1700s, and his decision to build a home on top of this low mountain was surely a bit impractical and required many enslaved people to run it. 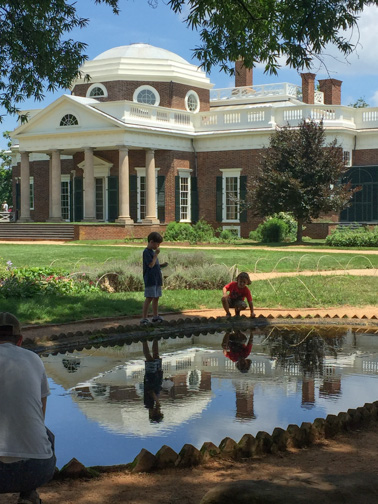 Then, of course, there is his legacy fathering children through one of his slaves, Sally Hemings. There was a new exhibit devoted to her on the grounds. The mask of “all men are created equal” did not get very far in his personal life, a grand egalitarian statement that did not mean that in his personal life, he treated these enslaved peoples any differently than other plantation owners. It’s a challenging fact to reconcile for our country, for his legacy.

Anyway, the plan was for us to go back down to the car, get lunch (which we made in camp before we left) and return to the house so I could do a sketch and Paige could take the slavery tour and manage the kids while I took my “drawing time”. I was determined to do a drawing while we were there, and so carried on with that plan, taking my sandwich with me to the first place I chose to draw, a spot alongside the small fish pond, looking towards the house. It was very hot, even though I was in the shade, and I felt pretty discombobulated, even slightly dizzy as I strove to get the proportions of the house right. I’m not sure if it’s because I was feeling a little rushed and stressed, trying to fit the drawing in while everyone was waiting for me, or because it was so hot, but I was super sloppy and felt like I could not draw anymore, even though I had a number of people come up to me and comment positively. 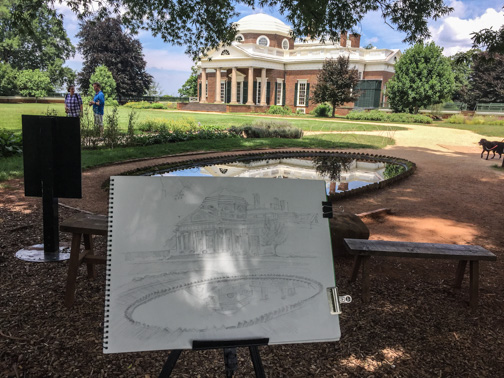 I finished one drawing by the pond, and then tried to go see the Sally Hemings film, but the line was too long and I was receiving texts from Paige, who said Phoenix was looking for me and they had 20 minutes to go on the slavery tour. I set my easel up on the opposite corner of the field and did another very quick drawing while Phoenix hung out, watching other people watch me.

We left Monticello without doing anything more - I wanted to stay and see the slavery tour and look at the Hemings exhibit more thoroughly, but the family now needed to head back to the campground and swim. After getting gas and driving around Charlottesville a little, we did just that - all swimming together for a while, and the kids and Paige saw lots of fireflies and bats. Paige made an awesome meal with potatoes and a sausage.

outside Charlottesville
a giant sign proclaiming
fealty to Trump 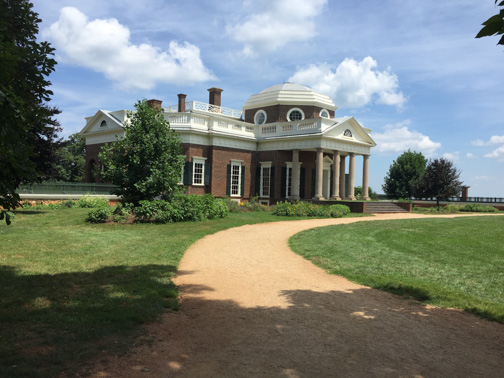 except for his slaves
all men are created equal -
epic irony 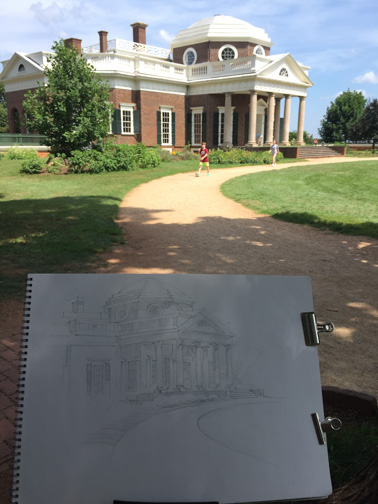 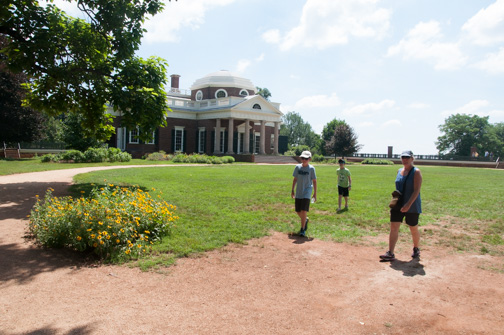 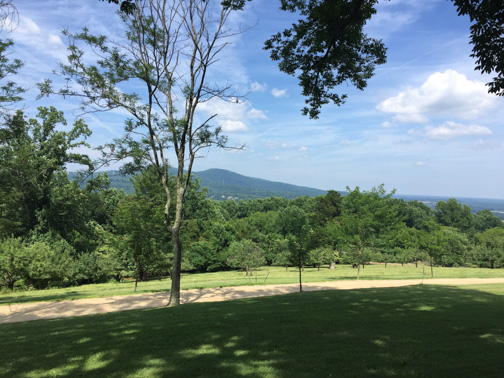 the little ice age
makes his double-paned windows
a necessity 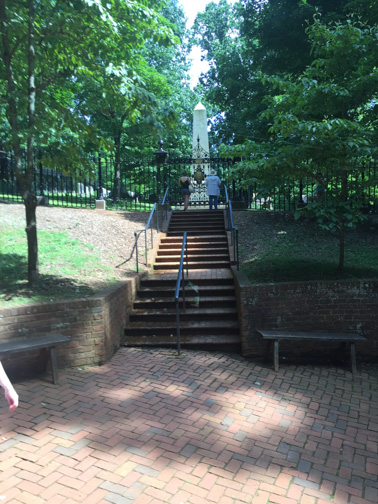 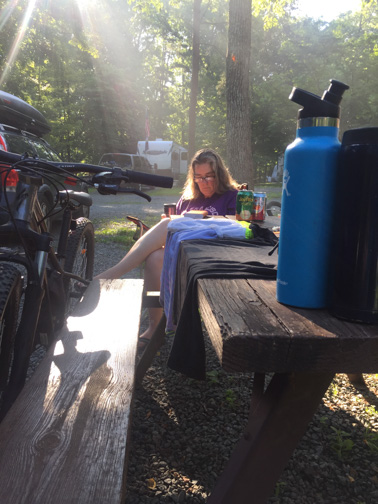