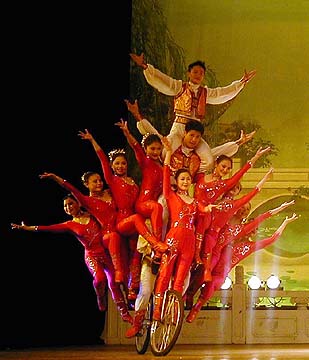 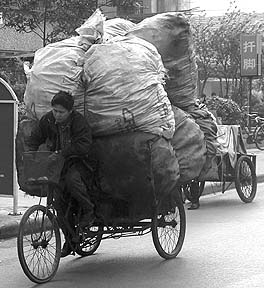 three generations
fuss over mom in wheelchair
then kiss her goodbye 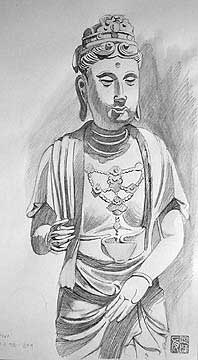 Sixteen million in Shanghai,
canola and rape seed fields alternate
in yellow and green, plots irregular, houses
roofed in red, airport smells like a lab, long
concrete soviet style architecture,
the custom agent reprimands me for
straying out of my spot in line. 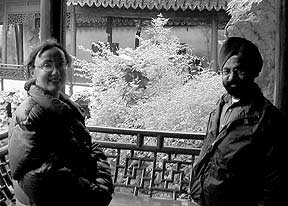 I see my name in a crowd
of faces, thankful I can be whisked
away - the man who picks me up is Qin Zin or 'accurate clock'.
We get in a small van with
a shifty-eyed driver and I notice a billboard
made entirely of flowers, welcoming me to Pudong.

Off-ramps are marked with Chinese
characters carved in rocks.
Every inch of arable land is used
and cared for, contrasting to the
visually pleasing, but baren green grass
and bluebonnets of Austin's highways.

The driver pulls on to a narrow road
where families putter on bicycles and
police in small mini-vans swerve into oncoming
lanes of traffic and i see a man pedalling
a bicycle with two trash cans strapped to the rear. 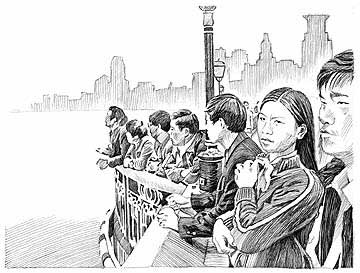 Feeling safe in the hotel I
venture on to busy chaotic Shanghai
streets, surprised how vulnerable and
exposed i feel.

I am terrified as I stride confidently
past swarms of people rushing to and from
their late afternoon activities, into the
open square in front of the Shanghai train
station. 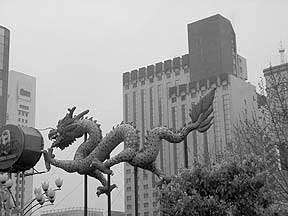 I follow the irregular circle
of a pedestrian catwalk and decide to
do a sketch. The observer, me, becomes the
observed. 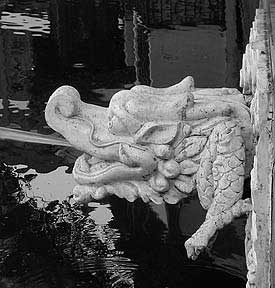 I now feel like a cowboy with my sunhat and wonder if I wear
my dark glasses, - will they be be offended?

Our trip leader, Pepi, wears a
turban - it is comforting to know that
he sticks out even more than i do.

In the evening our small group wanders the nearby streets.
magnificent facades of architecture
shine under bright spotlights, casting shadows into
small canyons of neighborhood apartment blocks. 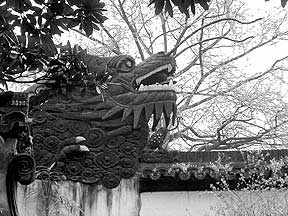 Women iron clothes in
streetside booths and we see
newly planted trees in the
parks, wrapped in thick rope.
we think they must be cold.
An older woman with a cane demands my money.

For our first evening meal as
a group (the Sierra Club group that I
have joined, that is) we are astonished
when loud music is switched on to see
a group of russian dancers performing a five act
variety routine in day-glow nylon costumes.
Unable to talk over this sudden barrage
I enjoy the cultural incongruity while sipping
tomato and cabbabe soup.
The two male dancers are strained
and slightly sickly, the women, hard-edged
and voluptuous. They quickly pack up after
their last dance and exit for their next gig.

4/8/03
A funny experience, this,
being led from place to place, on a rigid
schedule - not enough time to
worry or get too anxious about the
complexities of travel. It's almost like a job,
traveling with an organized group, but one
with many perks. 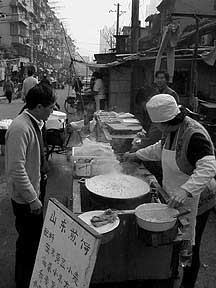 Maomao is our guide.
He has gone ahead and arranged
the places and times and locations
the meals, the busses, the negotiating,
on behalf of us.

I stroll out to the edge of
one exceptionally busy boulevard
trying to make sense of the traffic patterns.
Yes, there are lights, green and
red arrows - people are sporadic, extemporaneous,
quixotic in their crossing style,
as are the drivers, bikers and moped-wielding
inhabitants, who will disregard lights and
squeeze past and inbetween pedestrians,
slicing their trajectory.

People here take risks.
Overbearing busses graze mopeds
I get stuck in the center of an intersection
and freeze while vehicles blaze by,
for at least five minutes. 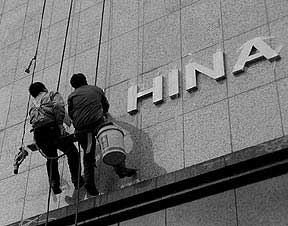 From one side of Shanghai to the next
a pall of misty cloud haze,
automobile exhaust, the sweat and
grime of oddly shaped skyscrapers,
an unstoppable engine.

Fortunately there are pockets of
respite. Before the morning's tour
I walk with cassandra over that same
treacherous intersection in to a park. 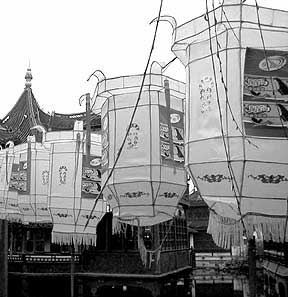 We are suddenly in the midst
of morning routines,
a man half-crouching and pushing
at the air in front of himself
in sustained Qi Gong.

Ladies practice T'ai Chi with fans and tassels.
Music from small radios provides a tempo for
a group doing a ritual dance. 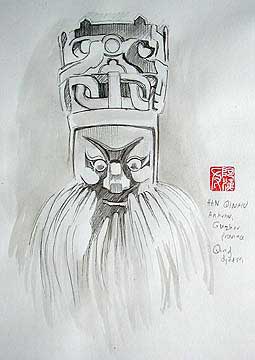 Cassandra loves this old neighborhood
and i am bouyed by
her boldness and appreciation of the
street vendors, the ordinary folks
walking around, their suspicious
gazes bothering me less.

Men ride by in bicycles piled
high over their heads with goods,
others tear apart what look like
ancient air conditioners. 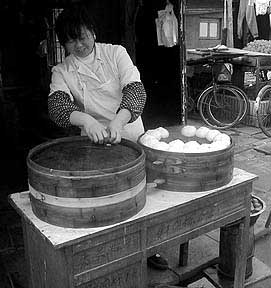 A few people smile at me.

The parks where people gather are
The only place many can feel community;
they leave their new high-rise apartments
which have replaced their former sprawling shanty-towns,
century-old brick bungaloes the government
has decided to tear down, to
give them all bathrooms and showers. 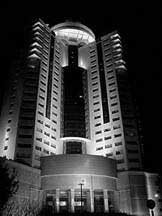 One of our group protests this notion,
that they are uniformly ordered to leave.
Is it so unjust, the communist government,
running socialist plans amuck over all?
I don't know how they feel.
maybe they want their own shower. 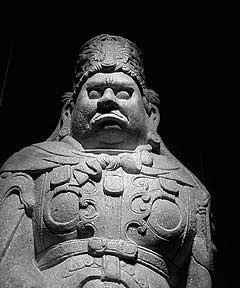 only five acres
in the center of shanghai
preserved elegance 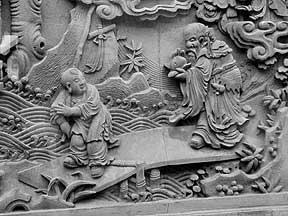 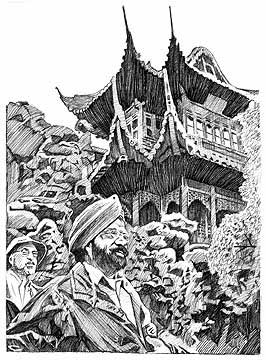 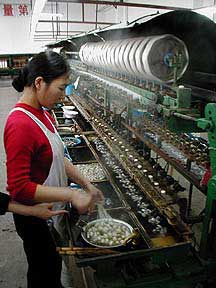 in german concession
government buildings abound
busses cut us off

At the first garden we visit,
that of Yu in the city center,
I take picture after picture in excitement
and later edit most out, except for the few
good ones that can contribute towards the
fourteen i've allotted per day. 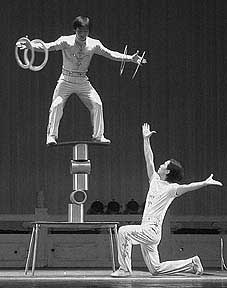 I want to stay and sketch
I could spend all day here.
We are whisked away through the
French, then German concession areas.
I benefit from the running commentary
from Qin Zhong. 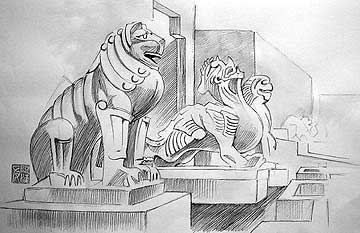 Still, we go so quickly -
I retreat into
a stupification of snot
and murky headed thinking. 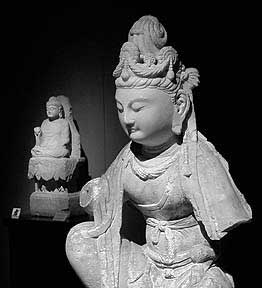 I am distraught over the
state of my personal health -
very conjested,
stopped up, foggy.

silkworm factory
turns into slikworm showroom
hoping we will buy 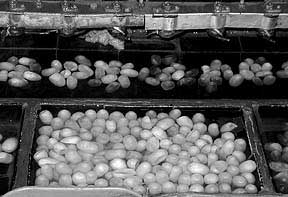 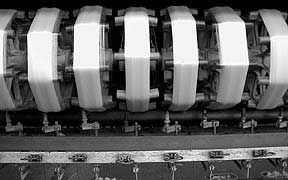 We are in a silkworm factory.
I am delighted.
The ladies, standing hour after hour,
thread spinning mechanical bobbins
from small round cocoons floating in water.

The translucent delicacy of each strand
is swept up onto spindles
where a brilliant white mass slowly gathers. 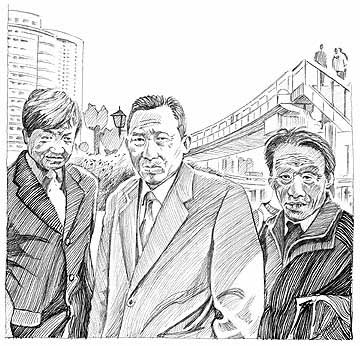 I begin to suspect that our visit is
scripted - we are led
into progressive states of amazement
before walking into the showroom.

Our small group - outnumbered by
uniform-clad sales clerks who stand
with arms folded behind their backs. 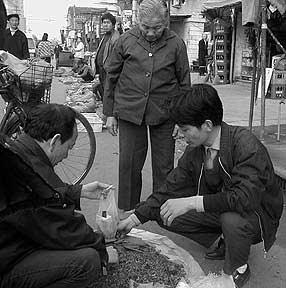 Shirts, bedding, clothing of all sorts,
arranged for us to buy.

Across from the silkworm factory
is a monumental slab of construction,
acres and acres it seems, wrapped in green
mesh with sky-cranes towering over this mass
of manufactured megapolis. 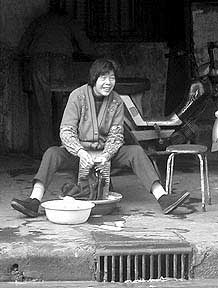 We eat more food
tempted by dishes that silent Chinese
women place on the lazy susan
rotating in the center of the table,
discussing what the ingredients might really be.

We head for the Shanghai museum
and have: two hours
in which to explore twenty five thousand
works of art
which is approximately point one two five five five
seconds per object
or, what i do is start sketching
the first beautiful Bodhisattava that i see
then a mask
and some of the mythical creatures outside,
and it is over. 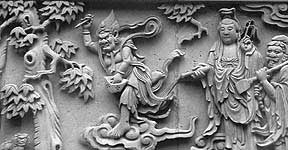 chinese acrobats
putting risk in perspective
while we sit and fret

But not until we eat once more
and watch acrobats perform in an
empty auditorium.
My vision of the Chinese is
transformed again when I contrast the
sight of the thousands of slightly
scowling masses, pacing the overpopulated
streets, to these experts at balance, poise, and farce. 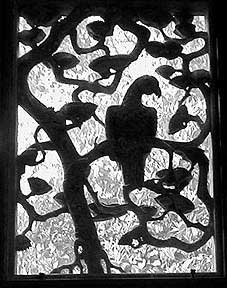