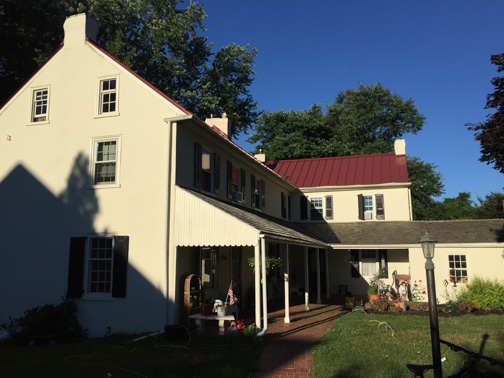 July 8 2018 Beautiful cool morning here in Pennsylvania - This is the most comfortable we have been for many weeks. This coolness followed us most of the day into Philadelphia as we did a long walking tour with Chris and Mary to see some places I had never been, walking amongst the tidy brick houses, many of which were outfitted with American flags and plaques, describing the historical personages who had once resided in the old homes. 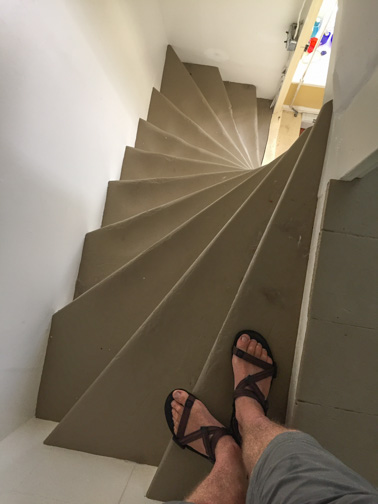 It took us about an hour to get into town, once we had made a side trip to get some cash and gas. The traffic crept to a standstill on several sections of the narrow highway, so it was somewhat stressful, but we were soon in the city, parking in a hidden spot Chris knew about, in a lot that had mirrored mosaics on the walls. 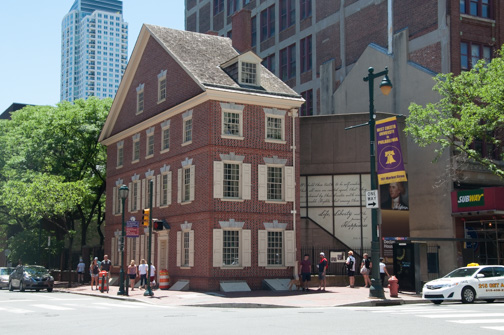 Our first stop was a bakery where we also were thankfully able to pee; right near the ‘old town’ section, whereupon we walked up to Independence Hall and the square where the Liberty Bell is displayed. Unfortunately, we were unable to tour the hall or the bell up-close on account of the crushing tourist traffic, so we gazed upon these important monoliths after consuming our pastries in the park, just outside of the nation’s first library, that Franklin also helped found. 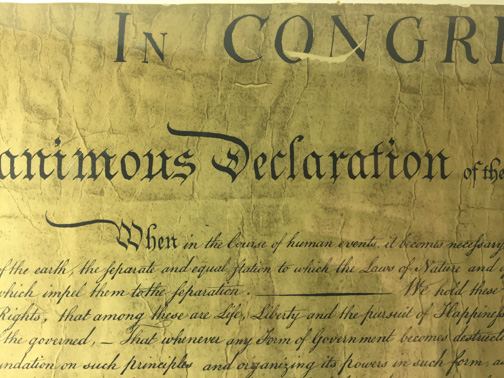 We then walked towards the ‘Reading Terminal Market’. We got happily waylaid at the ‘Declaration House”, a reconstruction attached to a building where Jefferson apparently composed the Declaration of Independence. It was only because I spotted the unusually-shaped building and saw Jefferson’s portrait on the outside, and because I looked it up on the phone, that we stopped to investigate. Happily, there were no crowd in there at all, only facsimiles of Jefferson’s draft of the Declaration arrayed with later reproductions, which were lovely to see and to think about how on that spot, more or less, this man put to gather, in roughly corrected scrawl, a statement that today is considered one of the most important pieces of writing of all time. It was good to see his handwriting, and to see the reconstructions of his bedroom as it might have looked at those compositional moments. 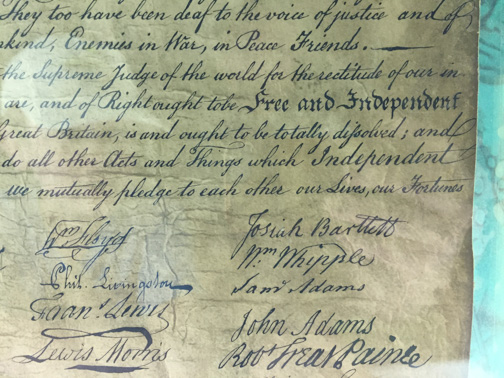 Onward we made our way down some busier streets to the lively under-the-train-station ‘Reading Terminal Market’ a bustling food court with many other offerings, from candles to curios. Here Paige scored a table from departing tourists and the kids had Nachos while Chris and I drank beer. 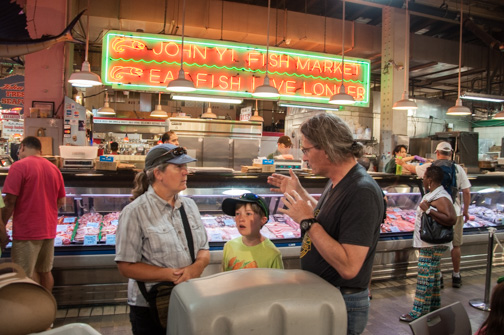 We then made a circle over to the City Hall, which is an impressively Baroque building nestled amongst modern sky-scrapers, then walked to Elfreth’s Alley, known as the ’Nation’s oldest residential street’ eventually going into one of the homes which are designated a national historical landmark, where I tried on some period costumes, to the humor of the kids. 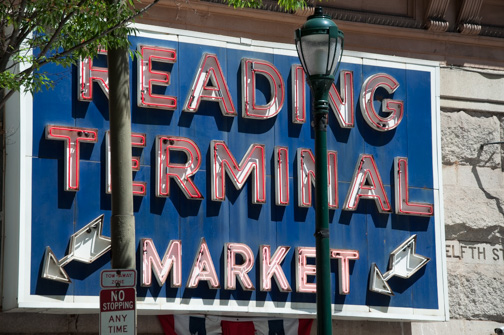 Also, we passed by the Betsy Ross house, but did not take the tour. I think we are getting tired of tours. It was a fairly long walk back to the cars from here, but I fully enjoyed the atmosphere and took many photos. Unfortunately Paige has a significant cold and so was dabbing her leaking eyes with a kleenex all day, into the evening, too, when we converged back upon the house and Chris grilled up a meal of burgers and corn and potatoes - a perfect end to a good day exploring. The kids played with Shadow, their dog, throwing him a bright orange ball. 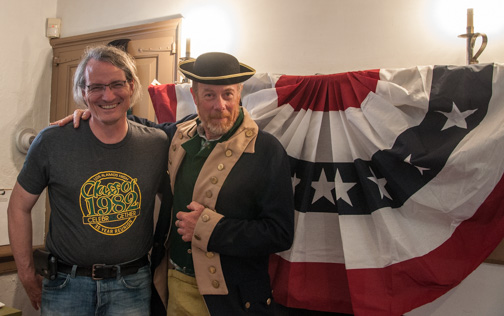 While we were at the restaurant, Chris and Mary told us the tale about the house-swap they made with the couple who now reside in the house Mary lived in, for 20 years, which they took us to see. This couple sold them the house they now live in. Surprisingly, there they were, at the restaurant, seated at a nearby table! 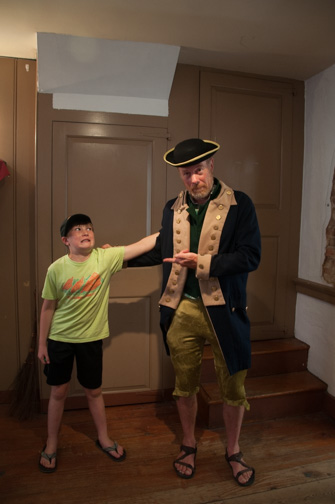 Mary and Chris are getting married in August. I was playing my backpacking guitar last night and eventually attempted Pachabel’s canon in D, and they told me that was the piece they will be playing at the wedding. 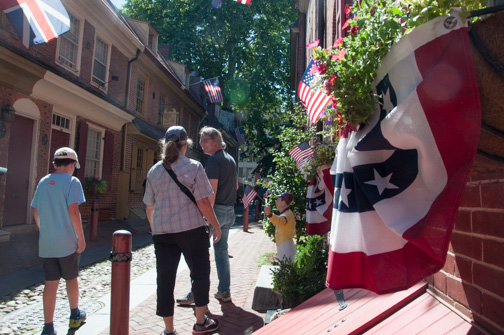 I also did a quick sketch of their house yesterday morning while Chris, Orion and Phoenix were taking Shadow, for a walk. I left the drawing for them as an offering of thanks for letting us crash here. 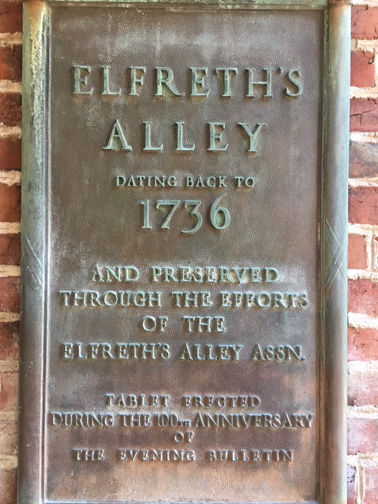 rebuilding the past
replicas of replicas
strive to take us there 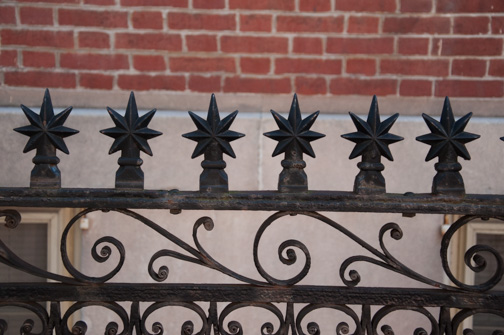 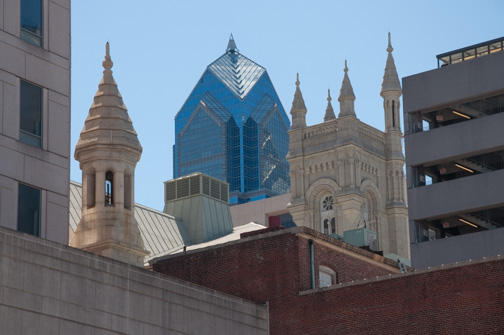 tourist headquarters
at the home of Betsy Ross:
is nothing sacred? 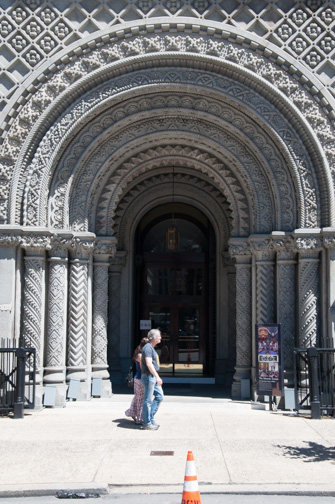 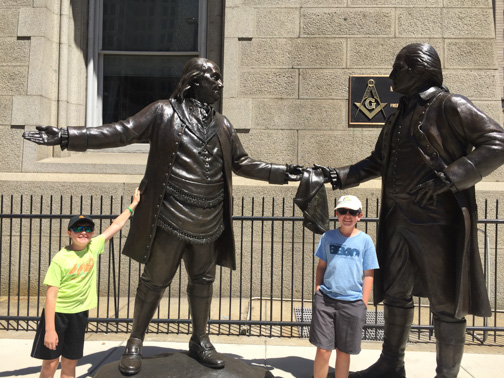 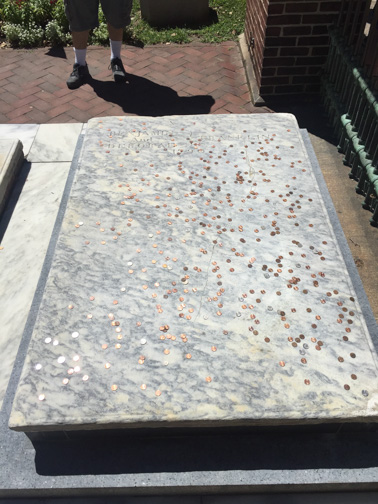 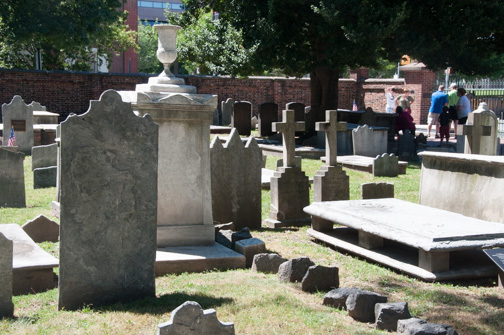 singing the refrain
‘Philadelphia freedom’
as we walk the streets 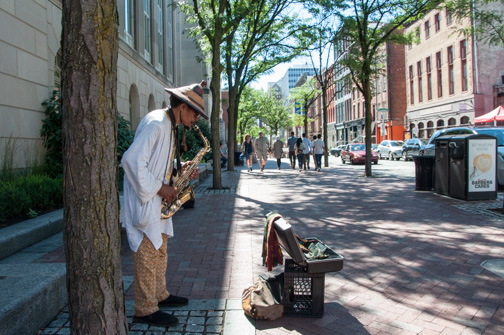 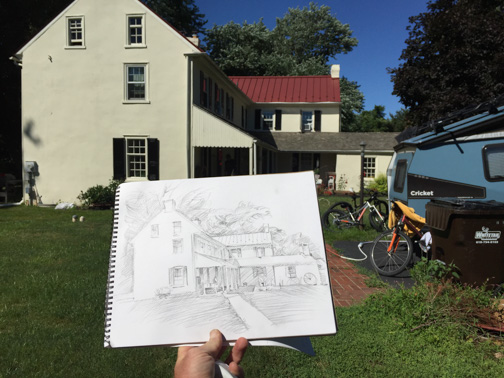 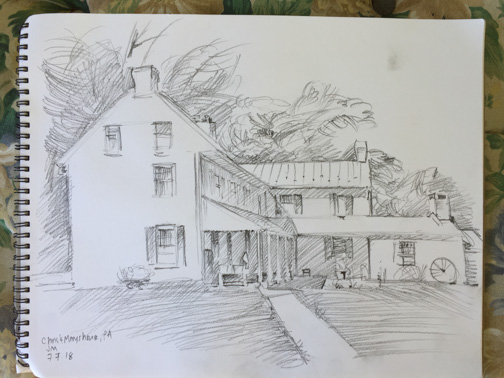 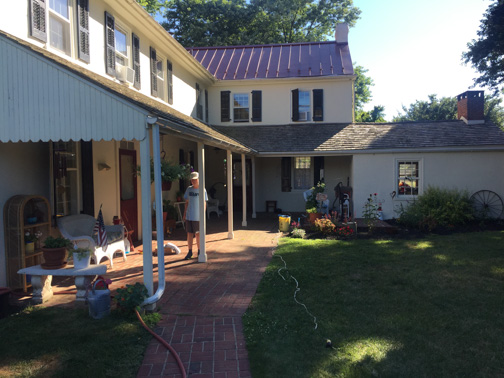 not seeing any
billboards about the Mohammed
here in Amish country 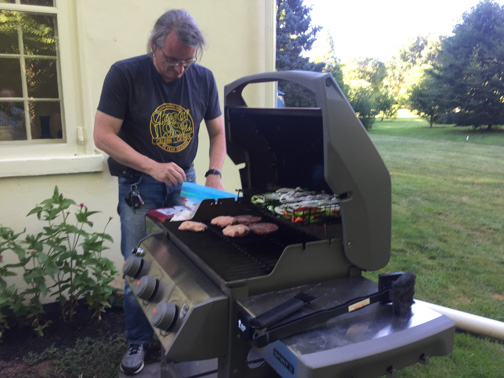 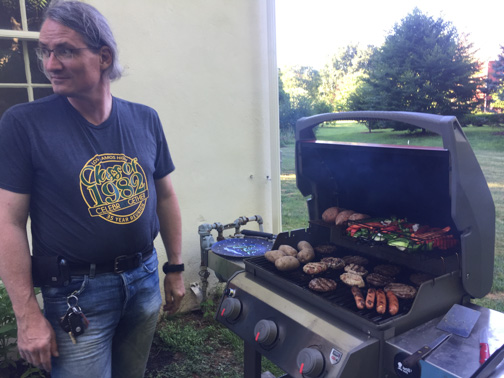