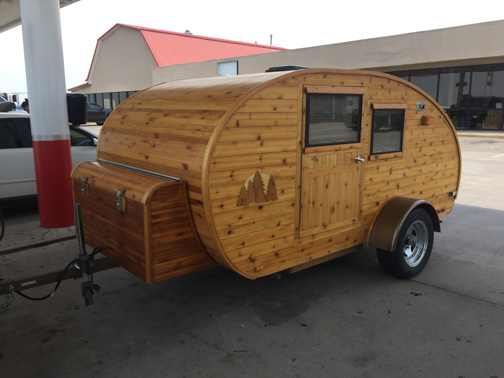 The final morning of the Epic Road Trip 2018. Doves are cooing and a chilly wind is blowing through the campground here in Goodland, Kansas. We are thankfully at another KOA, now properly appreciated as a clean travelers’ haven: a modern roadhouse with spotless bathrooms where weary RV’s hitch up to water and electrical service for a night of rest and recovery.

The drive to Goodland was on I-70 the entire way, a straight shot from Kansas City. At one gas station we saw a cool-looking teardrop trailer all finished beautifully in wood, so we chatted with the woman who was driving it. She was from Missouri and was headed to Colorado with her dog to do some mountain camping with her girlfriends. Her trailer was basically just large enough for a big mattress inside, and her cooking gear was accessible on the outside. She said she had been a teacher and always took her kids on summer camping trips; she liked our Cricket, and applauded us for taking the kids on an Epic Road Trip.

At the KOA we got a spot in the shade, but minutes after we set up, a gigantic RV called an ‘Excursion’ backed into the spot right net to us, a slight disappointment, yet our spot is really quite nice as we have an area with a picnic bench nestled against a tree. The kids and Paige immediately went to the pool, while I got out my laptop and transcribed all the remaining haiku that I have penned, starting from our afternoon walking to the White House up to the present moment. We had a meal of rice, peppers and sausage, something Paige threw together since we forgot to get canned tomatoes for the garbanzo bean curry she had been planning to make.

The drive back home will take about 3.5 hours. Peter and Cathee are apparently cleaning up right now and should be gone when we roll in. 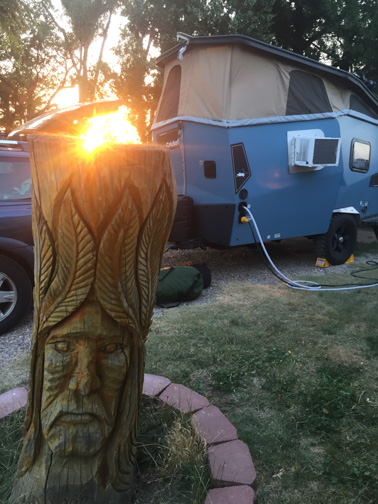 July 22, 2018 We have been home for an afternoon and a full day! In Kansas, instead of washing the dishes after breakfast, as is our custom, we threw them into a big trash bag, anticipating the dishwasher would take care of them; and packed up for the last time in the now ritualized procedure of closing the top shell, disconnecting the water and electricity, winding up the rear stabilizers, putting the bikes on top, and finally hitching up the trailer.

We had to get gas almost right away. For some reason the gas mileage in Kansas is the lowest we’ve had on the whole trip, around 13 mpg. We stopped at a rest area to get a snack, and an older couple started chatting with Paige. They were curious about the Cricket, and told us they were traveling across the country following square-dancing groups and events. We also saw them later at another gas station, where also a young overly-friendly guy with tattoos exulted all over the Cricket, as did a young gal with an accent. I feel like I should send an invoice to TAXA (who builds the Cricket) for ‘services rendered’, for extolling the benefits of the trailer to all who express an interest.

It felt good to finally see the hazy skyline of the Rocky Mountains as we neared Denver. We zipped into Boulder via the tollway, avoiding the bottlenecks on I-70. Then we were finally back in our driveway, no accidents or injuries from several thousand miles of driving through the United States!

The house had been freshly cleaned by Peter And Cathee who had been staying here intermittently, while continuing to camp up in Rocky Mountain National Park, as they like to do. They expressed gratitude for being able to stay here, in what is a time of transition for them (they need to find another place to live). 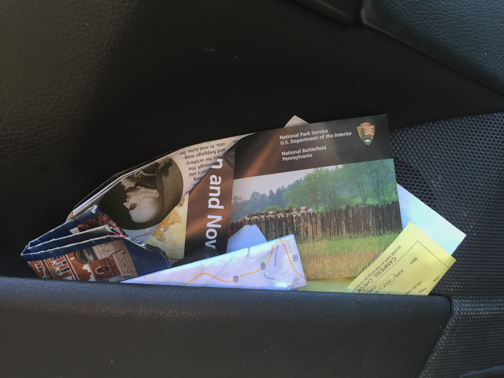 Cathee wrote a nice letter expressing her appreciation of both our gesture of inviting them to stay, and of my artwork, which to her conveyed a sense of nature’s eloquence. That made me feel good. She has been writing a book called ‘How Nature Sees Us” and she left a copy for us to read. They think my ear issues may partially be linked to the EMF radiation which they say is prevalent in our house, even with the cell and internet off. I am not sure; all through this trip, my ears rang quite badly. Was it the air conditioning? The weather? Some screwed up thing inside my ear? But, they say that the EMF radiation is everywhere, and that humans are increasingly negatively affected by it.

After we brought stuff from the Cricket into the house, Paige took off and went shopping, as the refrigerator was empty. While unpacking, I noticed that wasps were building a large nest on the porch, so I doused them with wasp killer (despite my appreciation for nature, these insects are not okay on the house) and then, while spray-washing the chemical off, I noticed the gutters were chock full of Cottonwood seed-pod debris; so I launched myself into a gutter-and-deck-cleaning project, feeling a surge of energy, now that I was home in familiar surroundings, after hours of sitting in the car.

Unfortunately, when Paige got home I suddenly realized that she might not appreciate that the kitchen was still a mess, with things from the Cricket strewn across the table and counters, and I got that look from her showing how irritated she was - she was hot and grumpy, too - so I just apologized, and asked what else I could do in the moment to make her happy, and that was tackling laundry while she made dinner. In retrospect, it’s all ok. Cleaning the deck filled a psychological need to ‘be’ back home; it took care of the wasp problem as well as the filthy deck, and cleaning the gutters made the house safer in the event of a fire, which appears like it could be likely. The county is totally dry; the creek is hardly a trickle, and the temperatures have been in the upper 90’s.

Paige soon returned to her non-accusatory self, and we ate a very healthy green meal and had a discussion with the kids about our experience at ‘Save-a-lot’ grocery store in St. Louis. That shopping encounter really had an impact on me, and although the rest of the family was not as affected as I was, we had a meaningful discussion around the issue of discrimination, bringing new insight into the phrase ‘The Boulder Bubble’. Everywhere we go in Boulder, everyone looks like us, but if we travel around, we find that things are a lot more mixed: racially, culturally, and geographically. I think that’s what we learned from the Epic Road Trip of 2018. 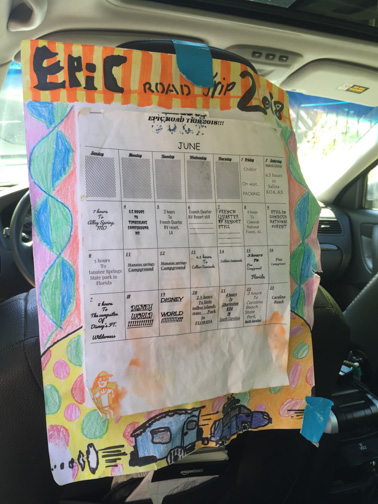