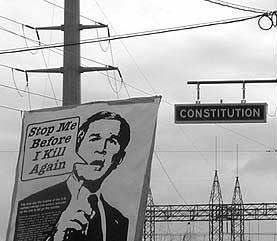 nuclear front line:
we in colorado sit
on many missles 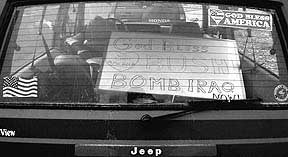 buckley air force base
processing intelligence
deep in the heartland

protesters gather
yet some people turn their thumbs
against our action 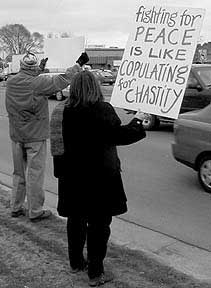 group hysteria
evident in the chanting
of stupid slogans

'get your booties
down to the rally'
peacenik on the cell 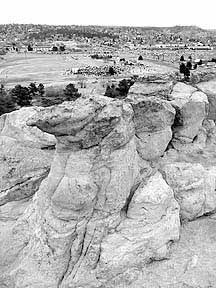 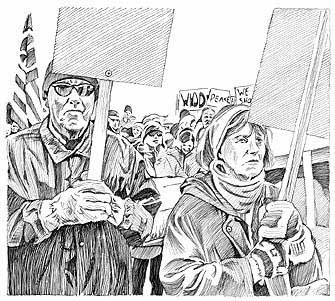 wagging tails
in sync with howling
of war protestors 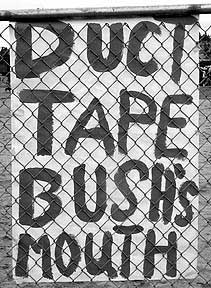 angry warmongers
in their SUV's
shout fuck you

just a bit
what the heck
it's for peace 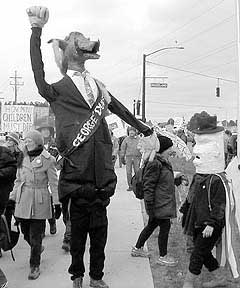 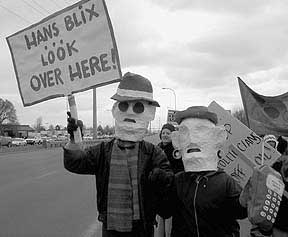 sanjay lays back
feet crossed at the ankles
scribbling poems 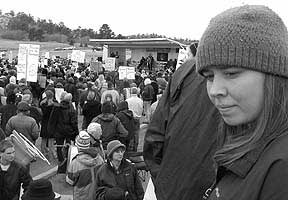 Hello friends,
Diana and I were both arrested in Colorado Springs.
We watched riot police tear gas and pepper spray
nonviolent citizens exercising their alleged first
amendment right to peacefully assemble. We traveled
to the Springs, the belly of the far right beast, the
land of Cheyenne Mountain, Peterson Air Force Base,
Lockheed Martin, Focus on the Family, and the Air
Force Academy, to express our discontent with our
country's path to war. About 3 thousand people waving
anti-war signs spread out along both sides of a mile
stretch of Academy Boulevard. Many of the passing
motorists ignored us, many honked and supported us
with thumbs up and cheering, and a few, a very few,
flipped us the finger and shouted things like, We
should drop a big one on the them all. The police
themselves eventually closed off both ends of the road
so that traffic could not pass through. At first I
thought this was to prevent our passing fellow
citizens from hearing our message. In retrospect, I
think the closing of the street had a very different
purpose. 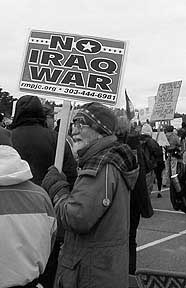 Once they closed the street, the protesters left the
sidewalk and entered the street. The riot police
deployed at the head of the crowd and started sweeping
forward. IF YOU DO NOT LEAVE THE STREET, YOU WILL BE
ARRESTED. We left the street. We all left the
street and once again lined up along the sidewalk.
The police arrayed themselves in battle formation,
shields held high, straddle-legged, fists coming
together in rhythmic bravado. After a few minutes,
the word came and the gas masks left their plastic
bags. 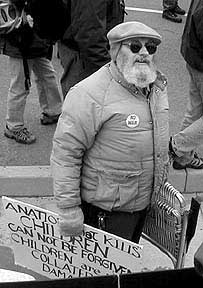 The next 10 minutes were calm, demonstrators on the
sidewalk, the brave blue firmly holding the street.
The peace marshals came alongside the demonstrators
and suggested we leave the scene and move to the Air
Force Base where a civil disobedience action was
planned. It seemed like a good idea to me, so I, and
most everybody else, started walking. As the crowd
dispersed, the police followed along. After I walked
about 400 yards I turned to see clouds of tear gas.

As I walked back to the mess, I came upon the mother
of one of my algebra students. I gave her water to
flush the gas from her red and burning eyes. She told
me that the people were leaving the scene when the
police just started rolling tear gas canisters down
the street. A large man, coming from the chemical
fog, walked past me carrying his 4-month old baby. I
left my friend and walked closer to the scene. 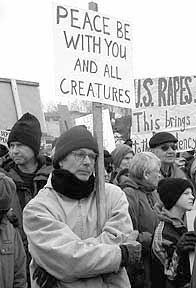 I stood at the edge of Palmer Park, the starting point
for the whole rally. I stood there and watched the
police driving people across a field and onto a
sidewalk in front of some small houses. As the people
proceeded in my direction along the sidewalk, police
walking along in the street repeatedly stepped up onto
the sidewalk spraying pepper spray in people's faces.
When the police arrived at the street, 15 feet in
front of me, they stopped. The people they were
following turned the corner and walked away up the
hill.

For the next 5 minutes, I just stood there surrounded
by 20 riot police all wearing gas masks. Then the
word came to sweep the park and remove all persons.
All, meant the twenty or so people spread out across
4 or 5 acres. Most of the police swept right past me
but one came over. 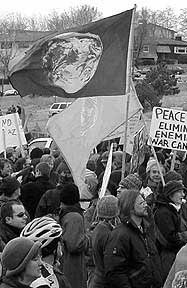 He told me that I needed to leave the park or I would
be arrested. I asked him to tell me which law that I
was breaking. He said the assembly was declared
unlawful and therefore I must disperse. I told him
that I would leave but I wanted to ask whether he
truly believed that what he was doing was correct.
He hesitated, stumbled a bit, and said yes. I was not
convinced. He told me that he was following orders. I
responded that orders have been followed many times in
the past, and they have not always been right. As I
left, I asked him to be kind to people. He said he
would. I believed him.

I found Diana and my friend Walt and we left. We drove
over to Peterson Air Force Base where a civil
disobedience action had been planned. The 10
participants were planning to stand in front of the
entrance and block the gates knowing that they would
be arrested. By the time we arrived at the base, the
action was over and the ten arrested. We were hungry
so we went into a sandwich shop located in a strip
mall just outside the base. I ordered a sandwich and
sat down and took a bite. The owner of the place, an
old Chinese woman, started calling from the front door
to her husband. She was yelling in Chinese but from
the tone I realized something important was happening
outside. I went out the front door and immediately a
group of ten police officers charged up. "YOU WERE
GIVEN AN ORDER TO DISPERSE AND YOU MUST LEAVE NOW OR
YOU WILL BE ARRESTED! I said that I had not been
given an order to disperse as I was just inside eating
a sandwich and I had just come out to see what was
happening. ARREST HER; ARREST HIM. 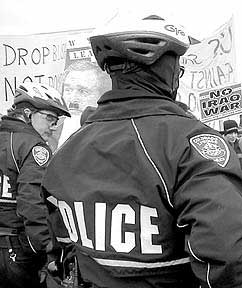 That was it. Within 10 seconds of leaving the
restaurant I was in police custody. 30 seconds later
I was in handcuffs and in the back of police car.
Diana was put into another car and we were taken to
separate locations. Over the next few hours I heard
the stories of the other 21 people who were arrested.
(I am # 22 as it says quite clearly in bold blue ink
on my right hand) Diana watched an officer pepper
spray a man in the face as he was trying to enter his
car to comply with the dispersal order. Two officers
grabbed another man as he was about to enter the Dairy
Queen. Another woman was pulled from the front seat
of her van. A mutual friend, a retired 68-year old
man, was arrested because he was told to walk away and
not look back. He looked back.

After a couple of hours the whole thing came to a
close. They took our pictures but not our prints. I
never heard anything about my rights. Does Miranda
still exist? 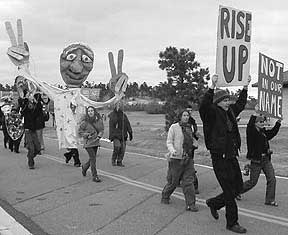 March 11 we return to the Springs for our court
appearance.

This morning I awoke to a beautiful sunlit carpet of
new snow. The evening grosbeaks were at the feeder,
flashing their black and yellow as they flitted from
tree to feeder and feeder to tree. The airwaves were
bringing a Native American flute into the room. There
was something in that flute that I needed. I don't
really know what it was but I think it might have been
simplicity. 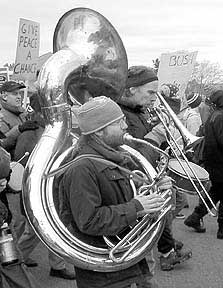 I will find it. 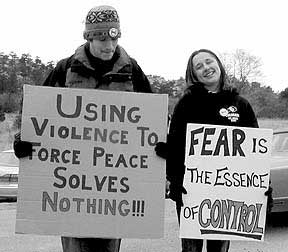