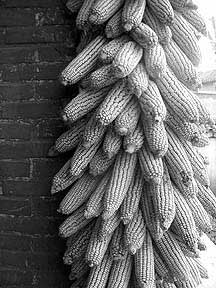 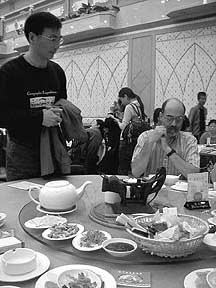 Pepi Kochhar, our Sierra Club trip leader, is an Indian native who has settled in New York. After studying engineering and getting a degree in management he decided to enter the real estate market, and is able to conduct most of his business while on the road, using the internet. He wears a turban at all times - a light blue or grey wrap around his head, secured in a neat bundle with small pins. He is short and his dark black beard shows signs of white underneath. He has a relaxed attitude and loves the chinese women. Knowing me to be single, he confides to me the ones that really affect him, and mostly I find that I agree. 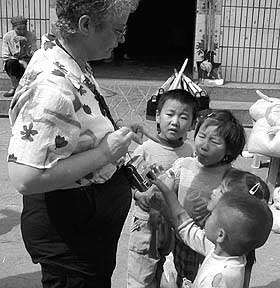 Barbara Lenssen, a semi-retired psychologist who has traveled extensively, is in her 70's. She has lived in Santa Fe for many years, has made seventeen trips to Africa, is a lover of green chilis on toasted cheese bread and the Santa Fe Opera. She among all the others on the trip shared my interest in writing haiku as a way of invoking our unusual surroundings.

Keith Anderson, husband to Barbara Lenssen, is a financial consultant from Santa Fe, formerly a grocery store executive. The tallest of our group, he asks insightful questions of our tour guides that reveal a deep understanding of the world and the way different cultures interact. 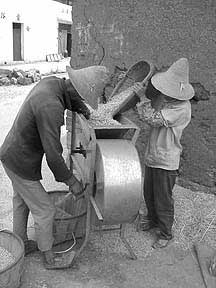 Gene and Gayle from Denver: The distant antics of their 19-year old son have amused us as he sends various bits of internet half-truths about his whereabouts, causing them to make a bee line for the internet cafes to try and figure out what is going on. Gene is a retired architect who worked for the Park Service; of jewish heritage, with a greying beard, balding, big teeth, large glasses. He is involved in leading Sierra Club trips as well and will be taking a group to Nepal in the fall, as well as leading several backpacking trips. His main interest now appears to be traveling and wilderness adventures. Witty, slighty acerbic. Gayle is a greying, bubbly, youthful nurse from Denver, occasionally ribald with a healthy perspective about life and it's pitfalls. Slightly dour sense of humor, very adventurous and curious.

Probably the most colorful and complex character of the group: Cassandra , in her early 50's. lost her husband in a plane crash six years ago. Extensively travelled and well educated in literature and the arts, she feels frustrated, as I do, at the short amount of time we have to really explore and investigate. She is the 'princess' of the group, stating so herself at her unflinching readiness to have her exact desires attended to. She is slighty heavyset and attracts much attention wherever we go on account of her floppy hats which take up lots of real estate. she is somewhat demanding but at the same time she can be charming and adventurous. She is bold and unafraid to be outspoken in the face of challenging situations. Will take a picture of anybody. 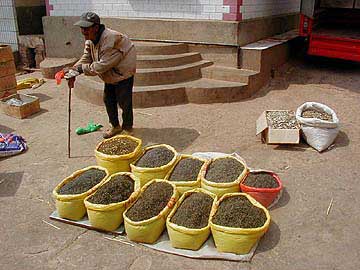 maomao, our guide. Hailing from Nanjing, this man in his early 40's speaks excellent english. this Sierra Club trip is the second he has led. His perspective in China is tremendously valuable to me, and without him we would be flailing completly. He is well organized and totally helpful in helping us manage all the small details of negotiating this intense place. 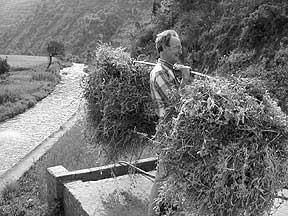 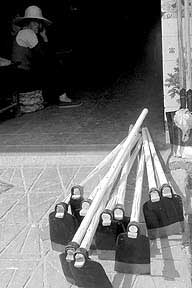 james points out the narrow guage
railway that goes from kunming to
viet nam - high above the highway,
something the french wanted in their bid
to extract the resources from this rich
land - "the land of spring", and transport
it through to viet nam.

deforestation
on the hills outside of kunming
roadside tree trunks white 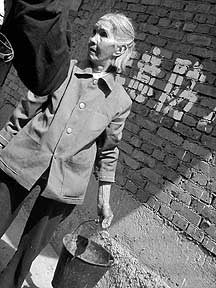 we stop at a local village, one
that apparrently puts up with tourists
examining their somewhat cramped
and preindustrial surroundings.

the outside world does get
through but much remains the same
we walk on pathways of wheat
to help break the seed
watch locals at work, locals sittin' 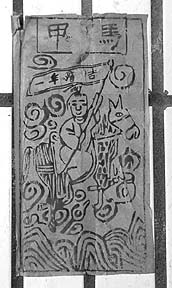 god of protection
on pink transparent paper
outside yu doorway 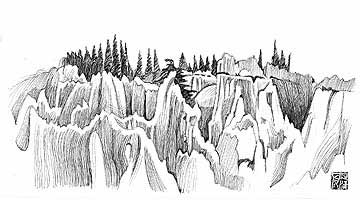 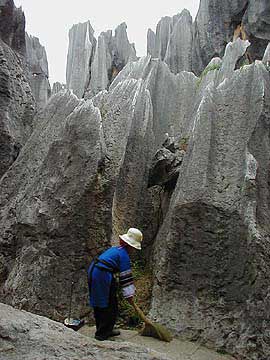 at the stone forest i avoid the expected tour
lecture and disappear as soon as we
get near the stone formations, after
lunch - to draw - and i have so little
time to do so. when will i ever be
here again? 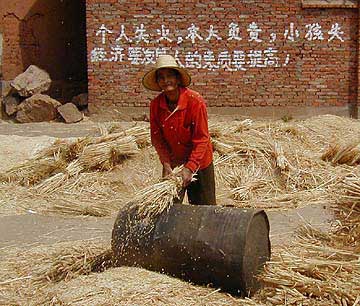 tips for the tourists:
not allowed to touch the horn
but you can grab the bell 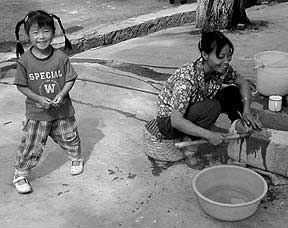 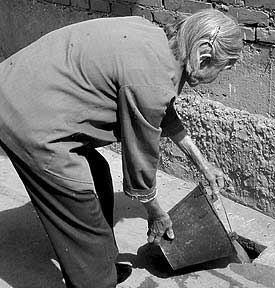 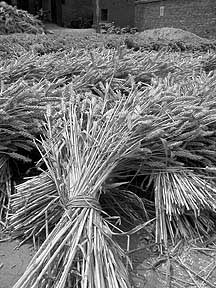 no one notices
cannabis plant in compost
except me that is 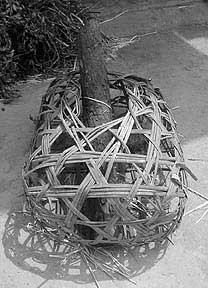 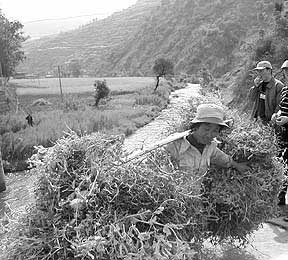 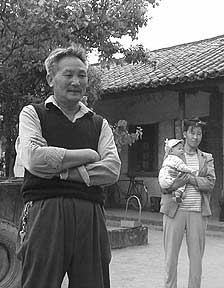 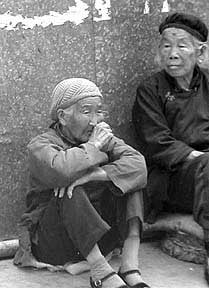