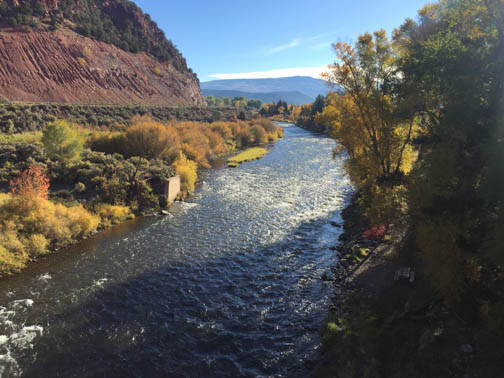 Eagle River outside of Carbondale


In Carbondale, Colorado the morning after the 25th annual spud fest. We departed Boulder Friday afternoon around 4:30, heading down to Patty's house to pick up Marley, who we agreed to take up with us, so he could spend some extra time with Shaun. 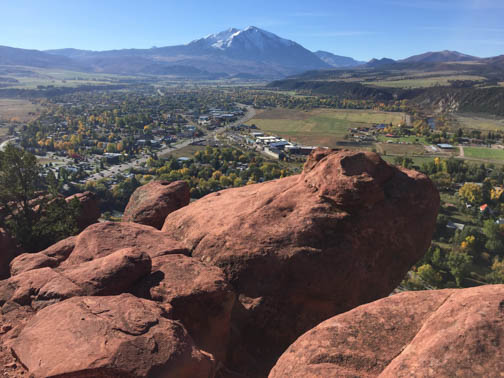 This was fine – we hardly noticed the kids at all, as they were all glued to their screens – but it took us over an hour to even make it out of Boulder, the evening rush–hour traffic was so bad. It was a beautiful clear afternoon, however; and if the traffic irritated our travel, the serene light mollified our distress at having to sit and wait to turn left on baseline and Broadway for numerous cycles, (as without a left-turn arrow we were forced to wait for an opening after the light had turned yellow). 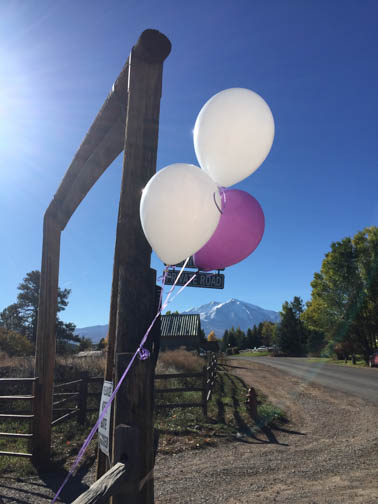 Mt. Sopris from the outskirts of Carbondale

We eventually made it onto I–70 as the fierce winds that flowed over a cotton – candy bank of clouds topping the continental divide attempted to push us back to Denver. Undaunted, we headed west, jockeying for road position with the streams of other city-dwellers escaping west as the weekend began. 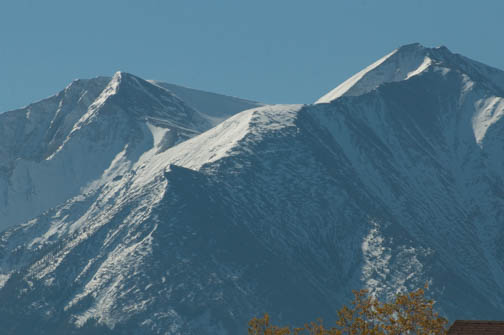 A brief stop at the new whole foods in Frisco confirmed the homogenization of wealthy culture into previously backwards mountain towns. Arrival into Glenwood Springs was met with the temporary detour into the town, a result of the still – ongoing construction of the new bridge spanning I-70 that has reportedly caused many traffic delays, yet promises to serve the community for the next 100 years. 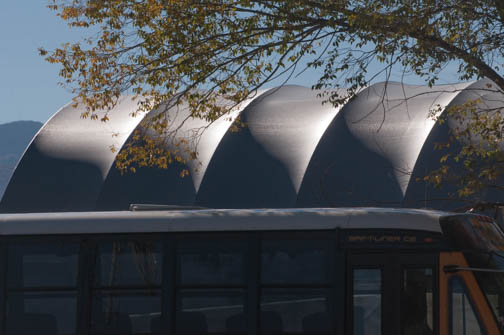 School maintenance yard on our way to the town

Elizabeth welcomed us warmly to the house when we arrived, and we settled into sleepy conversation as the five-hour escapade of evening travel came to a close. Without Dave, who is studying Chinese in Beijing, the Spudfest has taken on a slightly different hue, and we all missed him. It remains a social event of our own invention – Dave and Marty and I hosted the first Spudfest on 17th St. in Boulder 25 years ago, on Marty's suggestion. 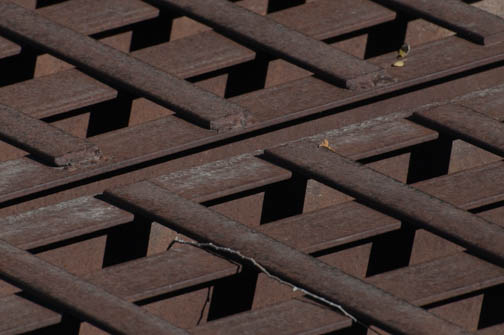 Metal grate in the sun

On Saturday morning, we breakfasted leisurely, planning out the day; I went for a 59-minute run from their house up to the summit of Redhill, a glorious jaunt in the Crisp roaring Fork Valley air. I again listened to music as I ran, this time more of the Schubert piano impromptus plus some Mozart Sonatas. Mozart can be much more boxy in his compositions, but also enlightenedly complex. 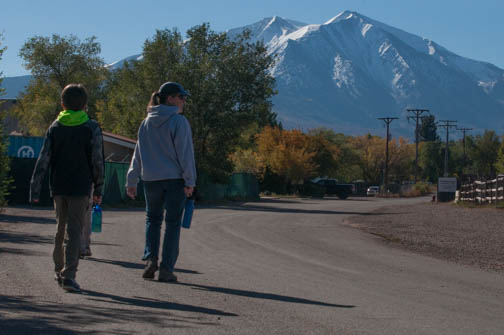 Walking to town for the parade

When I returned at 10 the family was ready to walk into town for the parade. Carbondale's population has grown a lot since Dave and Elizabeth moved here; from 2000 people to 10,000 people. The number of people lining the streets confirmed that; yet it was still a decidedly small-town event, one which occurs every year for the Potato Days celebration, now linked with homecoming events, illustrated by the floats made by the high-schoolers. Dave and Elizabeth's son, Shaun, was in one of the floats, wearing a silly chicken hat. 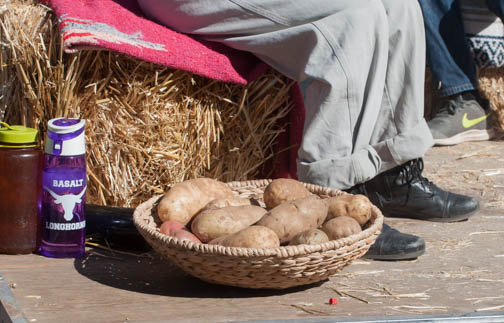 Spuds on one of the floats

I took a lot of people photos, working again on the premise that I can use these portraits to draw from, forsaking exact precision for a genuinely responsive eye-hand approximation of the particular gesture captured by the camera, (i.e, not traced, but hand-drawn) to a more universal reflection, as I am attempting to do in my recent paintings. 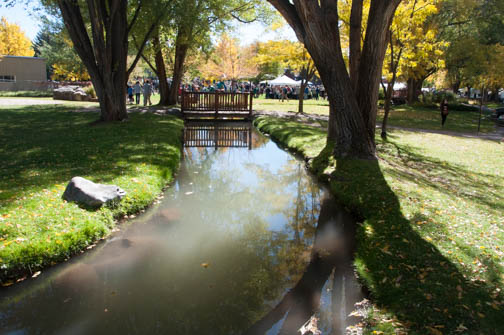 Following the parade in which I uncharacteristically wolfed down some of the candy that had been flung our way by passing parade participants, we convened in the town park to join the community in music, food and impossibly bitter mountain coffee that tasted, according to this lady who was standing in line several paces from us, "like prunes". The kids all tried it too, and I hoped that their obvious disgust -even when they had tempered it with copious quantities of artificial cream and sugar - convinced them to avoid coffee for a long while. 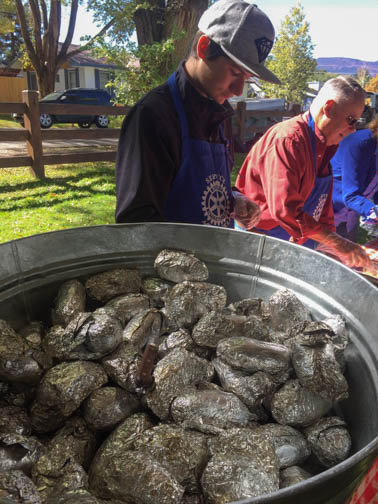 Spuds being served at the town park

Of course, some of the time in the lunch line was spent reminiscing about a Spudfest several years ago, when Bob snatched a potato chip from Phoenix's hand, and the chaos from whence such an egregious action ensued. 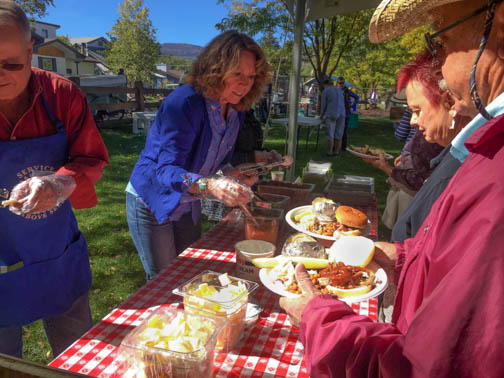 Volunters serving up meals at the town park

Patty arrived in town at around noon, and met us in the park while we were eating.
Music from the bandstand consisted of two high-school jazz ensembles, delivering watered-down jazz standards which most everybody seemed to ignore. We lunched on Sloppy Joes, pork from which had been cooked in big pits in the ground; and of course potatoes, with beans and coleslaw. Then we went to find some ice cream in town. 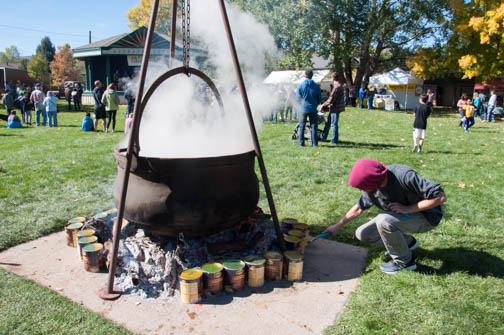 On the way I started talking to this elderly lady who was also walking out, asking if she had been to many years of this particular festival, like I suspected. She responded that indeed she had, and 40 or 50 years ago she had assisted in digging the pits for the pork fire: Dorathea Farris, who knew Elizabeth – and she is now an environmental activist, working on the Thompson divide issue, but had gone to school in Boulder. 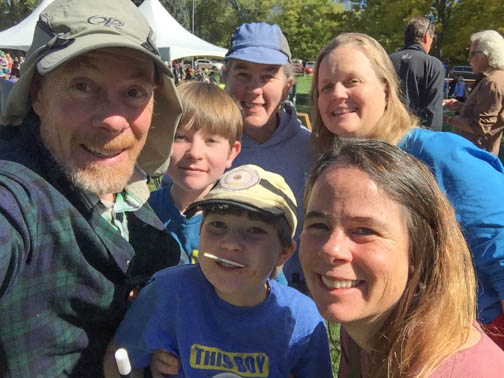 Our final act in town was to check out a second-hand store, which I avoided at first by sitting outside, yet was drawn in at the urging of Paige, who showed me some nice dress shoes for only $12. I agreed that they were a good idea to buy, but then found myself standing in a long line behind patrons quibbling over one dollar wine glasses and muffin tins, and a cashier who talked about how the names and middle initials of all these customers reminded her of names of her own family. 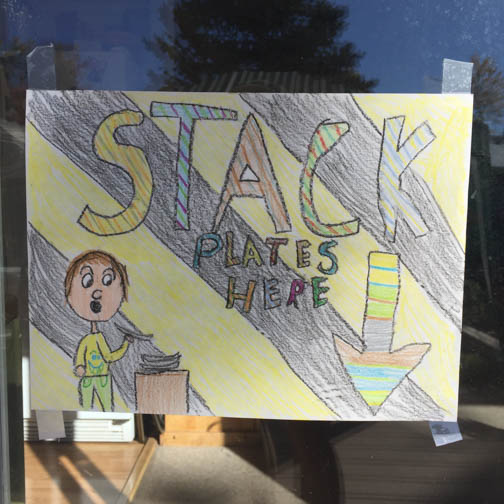 Phoenix's sign designating a place to stack the plates

Back at the spud ranch, we spent the afternoon setting up for the party: putting out tables, attaching strings of lights on the shelters, chopping wood for the fire. Paige readied our contribution; I sat in the sun playing guitar, drinking beer and watching Phoenix roll around on an exercise ball. 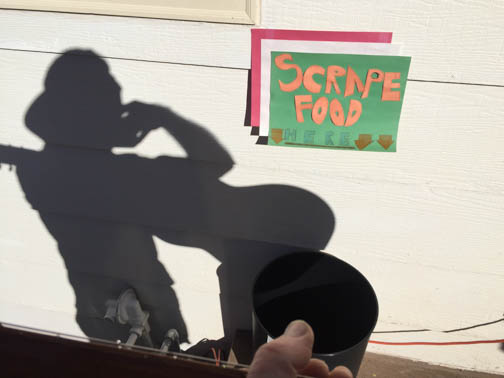 I enjoyed the banter between Elizabeth, Paige and Patty as the evening sun set and filled the living room with light; a calm before the guests started arriving, which they did in short order, bringing their spud toppings with them and arranging them on the tables with explanatory signs. 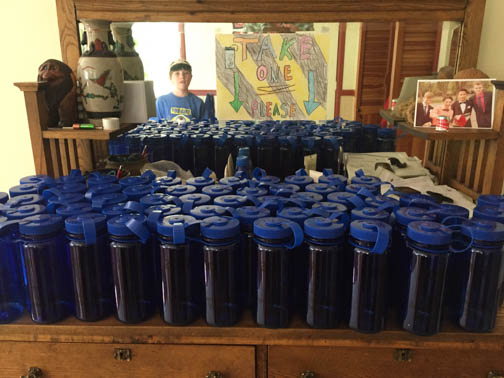 Spudfest waterbottles, distributed to all the participants

Phoenix made a colorful 'put dishes here' sign and Orion did one that said 'put food scraps here' next to two bins for everyone to use. When I went over to the neighbors house to get the potatoes that were in their oven, one of them exploded as I picked it up, leaving potato residue on the bottom. Their dogs suspiciously growled at me: Spud-truder! 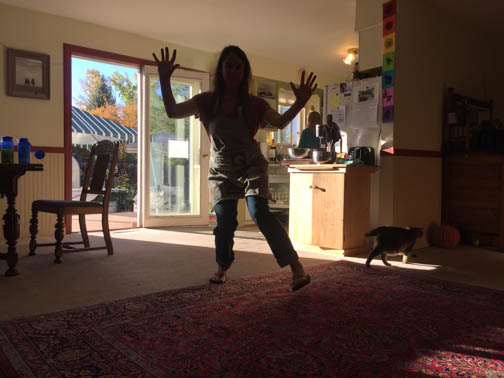 During the evening, Kenny and Carla's daughter Solana face-timed Sophie and Bob down in Gunnison. Bob declined to come because of some health and equestrian issues they were having. Tony Alcantara also did not show up, but his son Julian and ex-wife Diana did; with whom I had an animated conversation. 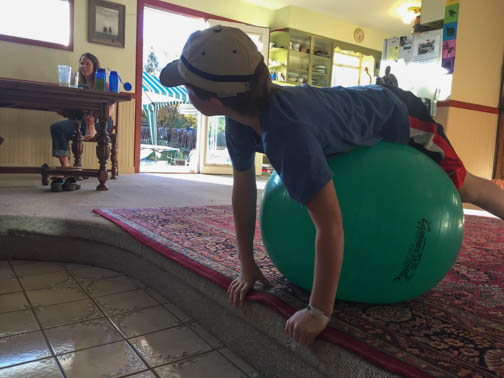 Rolling an a ball and enjoying spudversation

So the absence of Dave, Tony, Sophie and Bob was a bummer, but Kenny and Carla were there, along with many others, and there was still liveliness and enjoyment all around. One interesting connection at the end of the evening occurred as I hovered over the fire to get warm and talked to Karen Olsen and her boyfriend, who recalled that she had run into me in Santa Fe in March 2015 while I was drawing the Plaza. it took me a minute to recognize her (I had forgotten how surprised I had been, while sketching in Santa Fe, to meet someone from Carbondale, who knew Dave and Elizabeth). 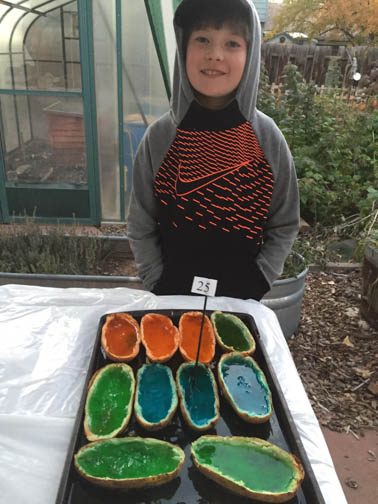 Phoenix won the prize for most creative, taking home an oversized potato masher for his contribution of Jell-O filled potato shells. A guy named Sid Graves (originally from Boston) won best international with a Thai topping. And Annemarie Zantac won best of show for smoked Cauliflower and Gouda. 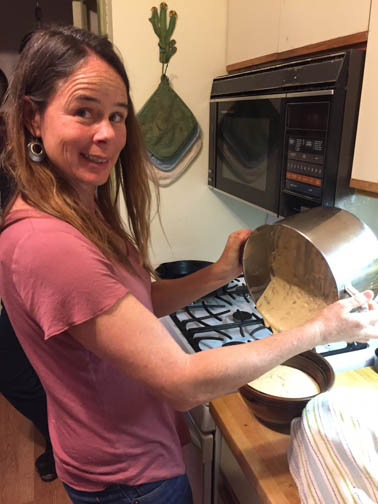 It was interesting to watch the kids interact, which wasn't much except for arranging headphones and staring at movies together. Marley is now 14, his voice is starting to change and he is getting quite tall. 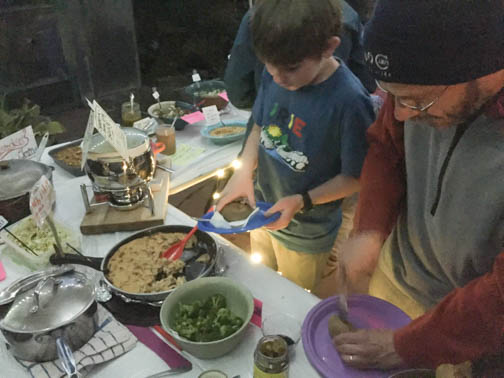 Orion and Mark trying out toppings

Not only did we not interact much in the car, he was totally focused on his Snapchat app once in the house, so at one point, after my run, I roused him from his screen and did an isometric palm-touching exercise with him to 'snap' him into the moment of being with us. It was fun and made Paige laugh heartily. 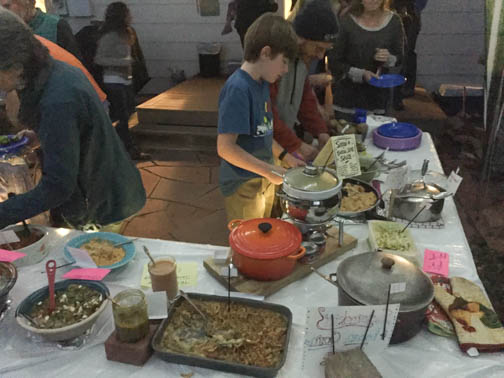 
Elizabeth has started a gardening non-profit and seems happy with this new mission in mind. Shaun has matured greatly, seems rather independent, and may go study abroad in Argentina for his junior year. 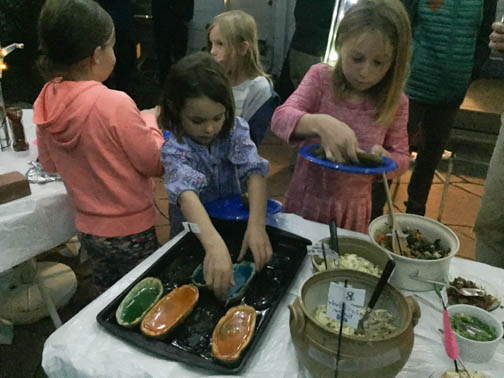 Kids going for the jello spuds

The kids slept in the large basement room with the cots. It was nice to have Patty with us (Marley went to spend the night with Julian). We had a mellow morning breakfast - no potato mountain this time, as all the potatoes had been eaten the night before. 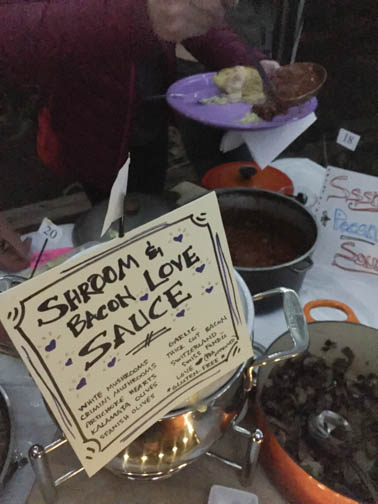 We helped Elizabeth take the shelters and lights down, then packed up the car, and headed home via Independence Pass, a direction suggested to us as a better way to go than the congested interchange in Glenwood Springs. It was through the most glorious aspens and cottonwoods that we drove on our way to the wendy summit of the pass, where we all got out and walked to the viewpoint, and fairly froze in the brisk wind. We stopped in Leadville for lunch at a Mexican restaurant, Sanchez. Home by about 530. That was spud fest 2017. 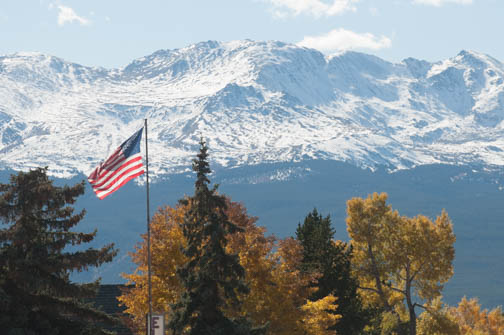 The Collegiate Rage, from Leadville